GetSlimThin
Home Practice How to Hit with Flat, Cut and Topspin Effect in Paddle

After having talked on other occasions about how to play tennis or how to play paddle tennis, two of the ten most beneficial sports for our health, it is time to try to perfect your technique in the latter. Specifically, we are going to talk about the different types of paddle strokes that you can carry out, and thanks to which you will be able to have greater versatility in your game on the court. 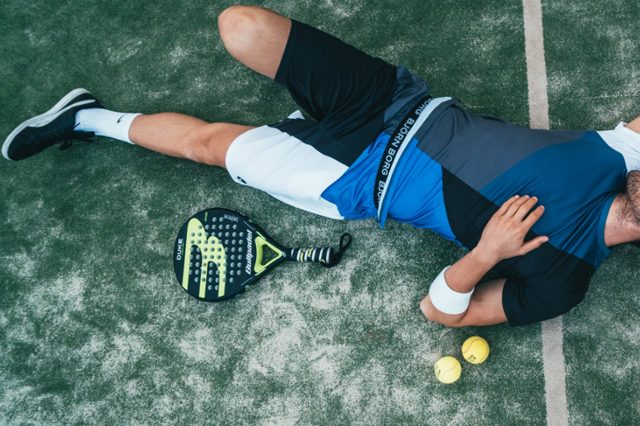 When we make the paddle strokes we must bear in mind that the same stroke can be performed in different ways, and that is where the different effects that can be given to the ball influence, as is the case of the flat, cut or topspin forehand.

If you want to know how to hit with flat, cut and topspin effects in paddle tennis, we are going to explain everything you need to know about each of these hits.

How to hit with flat effect in paddle

One of the strokes that you should know if you want to improve your performance in paddle tennis is to hit with a flat effect, or without effect. This is the first stroke that must be learned when playing paddle tennis, since it is the easiest to execute and to have greater control over the ball.

To execute a flat blow, you must make the blow by making a movement from back to front. In it, the racket is placed perpendicular to the ground, with a point of contact on the ball that is located behind it.

It is usually used to execute the lob, in fastball blocks, in the volley, in the wall exit and in the smash or strong shot forward to try to win the point in the game.

It is a hit that is not too complex for the opponent’s defense, since in this case the rebound of the ball on the ground and on the walls is quite easy for the other players to foresee; and it is also high, making defense and return easier.

How to hit with cut effect in paddle

For you to learn how to hit with flat, cut and topspin effects in paddle tennis; And once we’ve talked about the first one, it’s time to refer to the slice effect.

To execute it you must start with a movement from behind, hitting the lower half of the ball. This gesture mimics that of “cutting the legs of the ball”, ending forward while accompanying the ball.

It is one of the most used strokes in the world of paddle tennis. The reason for this is that when the ball hits the ground it is one of the shots that does the most damage to the opponent due to its low elevation. However, in the event that the rival is in the volley, it will be preferable to opt for flat shots that provide greater speed; or by a topspin.

This type of shot is more effective as long as after the bounce on the ground, the ball hits one of the walls of the rival field. However, it is a shot that does not have a great speed associated with it, especially compared to the others, so it can make it easier for the opponent to reach the ball.

The slice shot is mainly used in the volley, the serve, in some spikes and even in approach and wall shots by more advanced players.

How to hit with a topspin effect in paddle tennis

If you want to know how to hit with topspin, also called top-spin, we will have to carry out an upward movement, impact at the top of the ball and ending up, as if we wanted to “comb the ball”.

When the rival is at the bottom of the court, you can opt for the cut shot, but also for the topspin that makes the ball come out faster and higher. This blow is also recommended in those cases in which the rival is in the middle of the court or close to the net, looking for his feet; or hitting harder and to the body.

When it is done, a parabola must be found with which to make the ball fall to the opponent’s skin, or to give it more power on the same body of the same. It is an effect with which the ball is given a lot of speed. This can cause the ball to rise higher after bouncing off one of the walls and facilitate the opponent’s counterattack.

Advanced players use it on some groundstrokes and spikes to try to win the point by hitting the ball off the side or high over the net, making the opponent unable to respond.

Game Modes for Pool or Billiards

How to Learn to Hit a Punching Bag

How to Make a Paddle Tray Step by Step

How to Avoid a Sprain?

How to Stretch Lumbar

How to Learn to Hit a Punching Bag

How to Get a Better Butt

How to Learn to Swim

How NOT to Stretch Pecs

How to Remove Fat from The Knees

How to Stretch the Psoas

How to Start Swimming in The Sea

GetSlimThin is covering every aspect of fitness, and its goal is to inspire visitors to lead healthier, more active lives. The blog's name says it all: it's created to provide inexpensive fitness ideas that anyone can do at home. GetSlimThin is a comprehensive website that covers all things fitness-related: a well-known health and fitness website is a content-rich blog that will attract both fitness experts and newcomers who want to get in shape and live a healthy lifestyle.
Contact us: support@0c2.com
© GetSlimThin.com